The Supreme Court And Media Cost

In a 5-4 Supreme Court ruling last week, corporations will now be allowed to contribute unlimited funds to political campaigns. Corporations can also run their own political ads for the candidate they support. No matter what your personal belief is on this issue, it will have a direct impact on the cost to purchase television time. Admittedly, this may not be the first thing you think of when reading about this decision, unless you are a media buyer. During every election, candidates gobble up huge blocks of ad time. If possible and marketing conditions permitting, Tinsley Advertising tries to avoid these time periods. While it was not the intent of the high court to drive up the cost of television time, it will have that direct effect. This will especially affect Florida, Ohio and New York; states that usually have competitive elections. October and November will be interesting periods to watch from a media cost perspective.

The Florida Keys and Key West is making a huge impact on commuters in the Metro New York area. Besides television, newspaper and online, a two-month commuter train campaign is stopping riders in their tracks. Car Cards displayed in nearly every train in New Jersey, Westchester and Long Island remind weary riders of the beauty and serenity of The Florida Keys. With over 2,800 cards displayed, this campaign is reaching affluent suburban commuters as they travel to and from NYC. This campaign, which began at the end of December, was perfectly timed to coincide with a snow storm and unusually frigid temperatures.

What do you get when you mix an ad agency with toys, candy canes, Christmas lights, Hanukah candles and 7 cans of shaving cream? The new Tinsley Holiday Video! Over the course of three days the staff at Tinsley created this stop-motion-animated film just in time for the holidays. Everyone was asked to bring in stuff that reminds them of the holidays or things that represent their personality. Each person was then filmed with a Canon Eos camera as we animated Santa beards, lights, toys and other stuff to create a fun little film. We hope you enjoy it and we wish you all a Merry Christmas, Happy Hanukah, Happy Festivus or whatever you’re into. Have fun.

I was fortunate to be featured in SOFI magazine’s “33 EMERGING CREATIVE MINDS YOU NEED TO KNOW”. The party was held at the Rooftop at RED on South Beach. My wife Adriana and I had a great time meeting some of Miami’s most creative designers, artists, writers and performance artists. I exhibited two new paintings, “Lucas’ Decision” (shown in featured picture) and “Christmas Eve” (an industrial snow scene). It was a beautiful Miami night with a full moon rising over the ocean and the people at SOFI South Of Fifth & The Islands did a wonderful job. The art vibe is in the air this week with Art Basel events every night. It’s great to see the creative side of Miami. 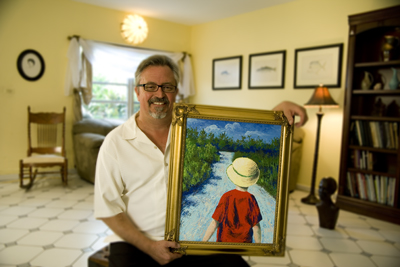 There’s no app for this. Florida Keys campaign spoofs app-mania.

“Real experiences are always worth more.” So goes the premise and promise behind our new ad campaign for The Florida Keys and Key West. Spoofing the omnipresent iPhone app spots with their endless variety of apps, we seized the opportunity to demonstrate how the beautiful, natural and personal moments in The Florida Keys can’t be digitized and stuffed into a handheld mobile device. Showing breathtaking footage throughout The Keys, the TV claims, “There’s no app for this…there’s no app for this…and there’s definitely no app for this” – the latter referring to one of the Florida Keys’ celebrated sunsets. The spot will launch on the web this month and segue into national media in January, reinforced by a national print campaign. We’re even launching a “No app” app to use on your actual iPhone. The Monroe County Tourist Development Council considered a couple of approaches for their winter season and determined that the “No app” concept was the most contemporary and thought provoking. Look for it online beginning next week.

NSU has most successful open house in its history.

The results are in and it’s official. Nova Southeastern University’s campus-wide open house Oct. 23rd and 24th was a huge success. With 3,177 RSVPs and 2,148 attendees NSU broke previous records, driving more potential students to their Ft. Lauderdale/Davie campus than ever before. Nearly 300 people participated in the financial aid information sessions and over 600 people took campus tours. Online activity also exceeded expectations with over 4,000 click-throughs.
Our campaign strategy began with 2 weeks of new image advertising (Grad and Undergrad TV) followed by 3 weeks of new tactical advertising (Campus-Wide Open House and Financial Aid TV) supported by radio, internet and print advertising as well as social media. The success of this event proves that a consistent brand message delivered over multiple platforms is the most robust strategy for reaching potential students.

Check out some pics on Nova’s Official Facebook Page

Mega publisher Conde Nast is now taking steps in embracing this digital age of ours with electronic versions of its most popular titles for the iPhone. The first magazine will be GQ this December priced at 2.99 vs the 4.99 cost of the printed edition. Important note is the fact that the iPhone version will include the same editorial ads as the dead-tree version which is important for advertisers along with rich media content at little-to-no-extra cost.

So me being a GQ reader (and other magazines), I would not pay 2.99 for a digital copy and I don’t think I’m alone on this. The iPhone screen is pretty tiny for a reading experience of long duration and not comfortable as opposed to some tablet/ebook. Even a bigger problem for myself is the price is just too much. I think the selling point for me personally would be .99 cents and this is how I feel about any magazine with ads that I’m subjected to read on the iPhone. I could just fire up Safari and see the same content for free on the publisher’s site. Regardless this is exciting news because it’s a sign of things to come. Newspapers and magazines have been suffering long enough and have been too slow adapting to the digital platform as most of us turn to the internet and other electronic services and devices to get our content. How much longer before we see every big print title in every digital format available to consumers?

Nielsen’s mobile web statics show that from July 08 to July 09, the demographic groups of 65+ showed the most usage growth. The least? 18-24 year olds, who are all up in this mobile usage already. 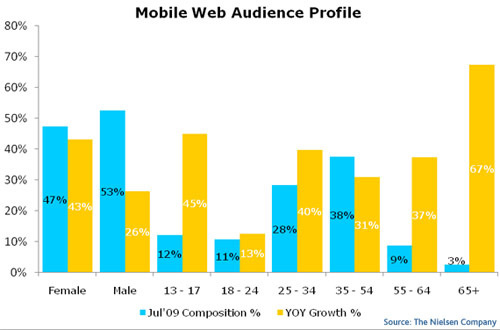 Even our very own John Underwood jumped on the iPhone wagon this month:

It’s official. Today, I will retire my Blackberry and succumb to the iPhone phenomenon. I meet this day with mixed emotions but know that it’s something I must do. Any advice on a plan and/or options would be greatly appreciated. Thanks and wish me good luck in the next couple of weeks as I will suffer from BB withdrawal and iPhone ignorama.

P.S. I need an “iPhone Newbie Support Group”. Is there an app for that?
Sent via BlackBerry from T-Mobile

Tinsley Advertising has just launched a new series of TV commercials for Nova Southeastern University, harnessing the agency’s powerful “Do what you want to do, be what you want to be” anthem with testimonials from real NSU students who are truly doing what they want to do and being what they want to be. The new spots, lensed by Chicago’s One World Productions and scored by Hollywood, Florida’s Audacity Recording, are part of Tinsley’s three-year old “Your Future. Your Terms.” campaign for NSU, which has helped the university achieve the highest awareness levels in their 40 year history, and generated an average of 1,500 attendees at each of their semi-annual Campus-Wide Open House events.

For the fourth consecutive month, the Florida Keys & Key West led all Florida destinations in lodging occupancy and average daily rate, according to data released Wednesday by Smith Travel Research.

Year-to-date, occupancy for the Keys was up 9.9 percent in August, while ADR was down 12 percent.

Tinsley implemented an additional media spend to promote the spring and summer business to the Keys. This spend included television, digital, magazine and newspaper in key in-state and “drive-down” markets. Samples of our summer advertising efforts below.