Ads on iPad Perform Six Times Better Than on Desktop

A recent study of rich media ads from textPlus, pointRoll and AdMarvel found, in the first four weeks of the iPad’s release, ad interaction times were 30 seconds, ad interaction rates range from .9 to 1/5% (6X higher than desktop ads) and 67% of users who viewed the ads’ video component watch all the way though as compared to 53% for the desktop.

Granted, some of this is likely due to novelty but if these numbers hold, there will be some willing iPad advertisers out there.

Apple is set to deliver a mobile ad platform by the name if iAd to one billion devices (iPhones, iPads and iPod touches). This ad platform isn’t just banners and text links. It is robust brand advertising that is as fully functional as a website or an app itself. Yes, ads that are apps within an app. iAds will be defining mobile advertising and will definitely shake up the mobile market. People aren’t searching on mobile devices, they are using apps so it only makes sense to enhance this experience. No one is happy clicking a banner and leaving their current site/app. This alone is brilliant. The ads have been hinted to be “premium” which sounds expensive. Sure they’ll make money from all this but I think it’s more for Apple to be the leader in this market. They want to to be the innovator in mobile advertising, reshape the industry and stick it to Google. Another tidbit is they’ll offer 60% of the revenue back to developers (ala Google Adsense) to help the creation of great apps on the App Store. And then HTML5! Every Flash shop in the country better be sharpening their HTML5 skillz. Anyway you see it, Apple’s new iAd is an exciting move.

Only problem is Apple will now massively once again control something else. Will they approve our anti/parody Apple ad? 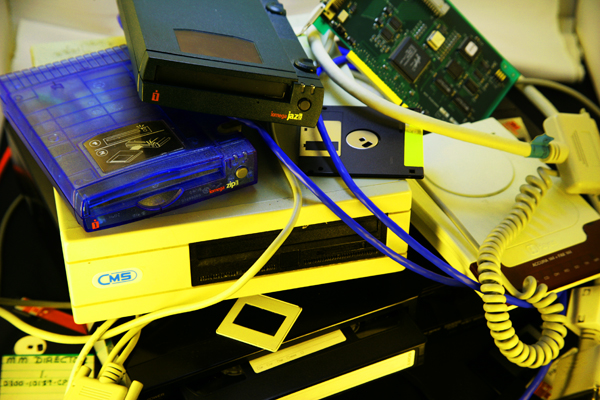 We have a room at our agency filled with fairly new, obsolete electronic devices. It seems that we live in an age of almost immediate obsolescence. There are monitors that cost more to ship than they are worth. Printers that are cheaper to replace, than to buy new ink. Piles of peripherals read like layers of techno archeology; the Syquest era, the Zip layer, the Jazz era, all as useless as the media that fed them. We even bought a state-of-the-art HD DVD player only to watch the market shift to Blu-Ray.

The effect of this is more that just the environmental costs of plastics and heavy metals in landfills. It leads to a sense of impermanence and an over-emphasis on “the shiny new object”. Software developers tend to overly “trick-out” new versions just so it appears radically different from the old version.

I recently got rid of a perfectly good phone to get the new Droid. I actually felt bad for my abandoned little Razor. CRT TVs, once the focal point of American family life, are kicked to the curb and replaced with plasmas that are replaced by LCDs which are replaced by LEDs that will be replaced by new 3D TVs (or some version of netTV).

The battle of the mega-pixels seems to have reached a stalemate as the average household has multiple digital cameras with twice the resolution of just a few years ago and at an average price of $150 the industry has nowhere to go.

The “Splinternet effect” will soon force Nooks and Kindles to have a deathmatch with the iPad and the last tablet standing will be the one with the corner on the content market.

Which leads to an interesting conclusion. Content is still the last frontier for innovation. Regardless of the platform, content creation and intellectual property ownership will be the deciding factor for all technology. All of these items are just “dumb machines” that only come to life when they are infused with human ideas.